How to Manage Prompt Three: Timing and more! 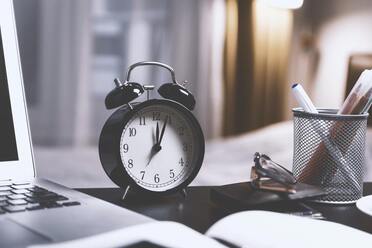 This blog will teach you how to deal with prompt three, including concerns about timing.

First, let’s talk about what you need from the definition. Many of my students only read and repeat the first sentence of the definition on Prompt Three. Actually, most of the time the first one or two sentences are only for background information. There are some exceptions, which are usually indicated by the “be” verb, as in “is” or “are.” Here is an example of that.

The Confirmation Bias
The confirmation bias is the tendency to search for, interpret, favor, and remember information in a way that confirms one’s beliefs or hypotheses while paying much less attention to information that contradicts it. The effect is stronger for emotionally charged issues and for deeply entrenched beliefs. People display this bias when they only search for information that supports views that they already favor, and ignore any information that contradicts it. This bias cannot be completely eliminated, but can be managed by learning critical thinking skills.

In this example, we have the verb “is” immediately after the title, “The confirmation bias.” This means in this case we DO need to include the first sentence.

A good summary of this would be:
“According to the reading, the confirmation bias is a tendency to search for information that confirms one’s beliefs while paying less attention to contradictory information. It’s stronger with emotional issues and deep beliefs, and cannot be eliminated but only managed with critical thinking skills.”

Right now, you are probably thinking, “But you ignored a lot of the definition!” You would be correct. I only said what was IMPORTANT, and ignored information that was REDUNDANT or REPEATED. More on that in a moment.
Keep reading.

Let’s continue. As I said, the definition in the first sentence is NOT common. It’s much more common to be near phrases that include, “is known as….”  “is called…”  “is referred to as…” and so on. Also, look for the sentence, “This is known as (TITLE OF READING.)
Here is an example:
The Actor- Observer Effect
In our daily lives, we interact with many other people. The motives for the behavior of others is not always well understood.  We often understand our own motives very well, but completely misunderstand the motivates of other people. This phenomenon, called the Actor-Observer effect, occurs in everyday settings and can cause conflicts with people. It is believed to happen because we have a great deal of insight into our own behavior and motivations, but not a lot of insight into those of other people.

The above definition is much more typical of Prompt Three. The definition is NOT in the first sentence. It comes right before the phrase, “this phenomenon, called (title)”  and there are also some important details after that sentence.
TIP: The last sentence almost always has an important point. Note it down.

“Okay, here’s a couple of examples– from my own life. I was driving down the road the other day, minding my own business, at a regular speed. Suddenly, a car came driving up behind me. And wow — it was going REALLY fast. It scared me a lot! Then the driver suddenly pulled his car beside me and passed me – still going super fast!  Well, I thought to myself, what a terrible driver this person was. He was not only speeding, he passed me so quickly!! So, I decided he was a reckless driver — that he was irresponsible on the road. I even honked my horn at him in annoyance.

Then, a week later, my daughter fell off her bike going down a hill and broke her arm. She was in terrible pain and she was screaming — plus, she had cuts on her face and legs. She was bleeding pretty badly.  She was clearly in a lot of pain and suffering. Well, of course, I wanted to get her to the hospital as fast as I could. So, I got in my car and sped down the road. I quickly pulled around every car that was going slower than me — of course, trying to get my daughter to the hospital. And, I thought this was reasonable — I did not think I was a bad driver — but that was because I knew that my daughter needed a doctor — I  knew why I was driving fast.”

YOU DON’T HAVE TIME TO REPEAT ALL THIS. PLUS, THERE A LOT OF REPETITION.
Look again at the transcript. Read it out loud. Think of all the things the professor repeats OR mean the same thing, such as:

AND SO ON!  You do not have to repeat things that mean the exact same thing. You don’t have time to do this.
So, what are the main points? You can divide this lecture into two parts. These are some sample notes.
Part One:
The professor was driving/ a car came up behind him / it was speeding / it scared the professor
It pulled around him / he decided the driver was reckless / he honked his horn
Part Two:
The professor’s daughter fell off her bike/ she was hurt with a broken arm and cuts / she was bleeding / he got in his car / he wanted to get to the hospital fast / he was speeding and he pulled around cars / he did not think he was a bad driver / he knew why he was driving fast

Obviously, this is not exact. You may take a few more seconds for one of these parts– but this is approximately what you should do.
In this way, you should be able to answer the question in sixty seconds.
Here is a sample response. Please read it out loud. IT SHOULD TAKE ABOUT SIXTY SECONDS.
SAMPLE RESPONSE:
“According to the reading, the actor-observer effect is when we understand our own motives, but we do not understand other people’s. This can cause conflicts, and it happens because we have insight into our own behavior, but not into other people’s behavior. The professor gives an example from his own life. One day, the professor was driving, and a car came up behind him. It was speeding, and this scared the professor. It pulled around him, and he decided the driver was reckless. He honked his horn at the car. Later, the professor’s daughter fell off her bike. She was hurt with a broken arm and cuts, and she was bleeding.  He got in his car and wanted to get to the hospital as fast as possible. He was speeding and pulled around cars. But he did not think he was a bad driver, because he knew why he was driving fast. This is an example of the actor-observer effect.”

NOTE: The last sentence (the conclusion)  isn’t necessary for a high score. I like to add it if I have a few extra seconds.
There you have it! That is how you cut out details to make it to the one-minute mark. Avoid repeating things that are redundant, focus on the main points, and summarize.
​
Tip: Remember you are paraphrasing and summarizing. You do not need to use the exact same words, but TOO MUCH PARAPHRASING can change the meaning. Try to repeat what the professor said as closely as possible without repeating details.
Remember: There is NOTHING better than practice!
About the blogger:
Kathy Spratt has been teaching TOEFL for approximately twelve years.
She can be reached at
houseoftoefl@gmail.com

The post How to Manage Prompt Three: Timing and more! first appeared on E-TEST.ID.

This blog will teach you how to deal with prompt three, including concerns about timing. First, let’s talk about what …

The post How to Manage Prompt Three: Timing and more! first appeared on E-TEST.ID.